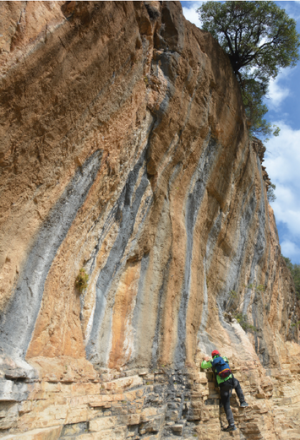 This was the expression that we couldn’t stop uttering from the moment that we entered Përmet until we returned to Shkodra. Sala, my friend used it constantly and for me it has great meaning. I have just returned from my second visit to the city of Përmet, the city of roses; a visit that I undertook together with some close friends, four years after my first visit there. I remembered that four years ago the sidewalks had the old communist tiles and the slogan of the city was etched in my mind: “Besides the sea, we have everything else.” During that time there weren’t many wandering visitors. The Italian association, Cesvi, had funded the network of artisanal goods “Pro Përmet” to help the citizens living in this small city. The mosque and the protestant church are divided by an unassuming fence.

This time around, Përmet was different. Its center was rebuilt, touristic buses were parked in the central hotels, and the passengers had booked all the available beds. Thus, we took accommodation at Vila Culi, charging 1000 lekë per bed. The owners are a nice and generous couple. They welcomed us with humor and they offered the rakia of Përmet and plum gliko. Robert, my friend and a mountaineer whom I met at Taraboshi march in Shkodra, suggested that we go to Antigonea for dinner.

The next day, after we had our breakfast, we left the city and headed to the Thermal Waters of Bënja, 12 km away from Përmet. There we found other people, who were already enjoying the warm waters. We also went inside the round-shaped thermal baths and applied mud on our faces. Meanwhile, tourists’ buses entered the scene. They were transporting local and foreign visitors, who had come to see Bënja.

Alketi and I hiked at the cave on the side of Katiu Bridge. We were taken by the panorama which included the bridge, the thermal baths and the canyons. A rare beauty surrounded us. The hiking continued as we reached a former army base and beyond, over the mountain slope, we noticed two tunnels. We were curious and we wanted to get closer and take a peek. Meanwhile, we received a phone call, reminding us that it was lunch time and we went to “Familjari” Restaurant right where we were, in Bënja. Eranda, one of the three sisters managing this restaurant, was waiting for us with a bright smile.

She is dedicated at her work. She used to play basketball with 24 Maji team of Përmeti city. The food and the service were exceptional, while we enjoyed jokes and laughs and the rakia of Përmeti. Once again Robert’s suggestions were right on the money.

On the way to Bënja we stopped to see a group of young folks, who were being trained for rafting. There I noticed my friend, Robert. He and his family live in a camp, Albturist Eco camping Përmeti, which is the only one in the city. He is a rather amicable and helpful guide and will accompany you during your stay in Përmet. If you want someone trustworthy, who will help you explore touristic attraction of Përmet, please call him on 0694250444.

How was our trip? We said it in the title: Përmet is unmatched. So, let yourself be taken by surprise in the city of roses.