What to eat and drink in Greece

Home » Destinacione » What to eat and drink in Greece

Greeks love eating out, sharing impossibly big meals with family and friends in a drawn-out, convivial parade of dishes. Whether you’re eating seafood at a waterfront table or sampling contemporary Greek cuisine under the floodlit Acropolis, dining out in Greece is never just about what you eat, but the whole sensory experience.

Take a cue from the locals and go straight to the source, heading to seaside fishing hamlets for fresh fish or mountain villages for local meat. Seek out tavernas that produce their own vegetables, wine, and oil, where the fried potatoes are hand-cut and recipes are passed down through generations. Regional variations are a delight to explore – no two meals will be the same – and these are some hints for how to get started.

Devour Greece’s favorite street food, souvlaki
Greece’s adored fast food, souvlaki, comes as either gyros (meat cooked on a vertical rotisserie) or skewered meat versions wrapped in soft pita bread, with tomato, onion, and lashings of tzatziki. They often throw in some French fries, to give it a little extra heft. Usually, you’ll be choosing between pork or chicken, but once in a while, you might encounter lamb. If you’d like to eat it right there and then, ask for it “sto heri” – in hand.

Where to try it: Kostas in Athens – or any town in Greece.

Savor succulent fish and seafood
What’s a trip to Greece without seafood, in all its variations and glory? Fish is often grilled whole and drizzled with ladolemono (lemon and oil dressing). Smaller fish such as barbounia (red mullet) or maridha (whitebait) are lightly fried and you can eat the whitebait or anchovies whole, or delicately nibble the meat off the bones. Octopus is grilled, marinated, or stewed in wine sauce.

Other popular seafood dishes in Greece include soupies (cuttlefish) or calamari stuffed with cheese and herbs, and psarosoupa (fish soup) – which comes in as many variations as there are kitchens. The best way to avoid imports is to seek out tavernas run by local fishing families, then always pick out your fish and ask what it weighs if you want to know the price (sometimes staggering). Best of all, eat it on the shore.

Grab some great grilled meat
Greeks are masterful with grilled and spit-roasted meats. In addition to souvlaki, enjoy païdakia (lamb cutlets) and brizoles (pork chops) or fresh fish and calamari. From Tsiknopempti – a holiday when grilled meat is eaten before Lent – to the Easter celebrations where lamb is either grilled or spit-roasted to break the fast, and even a basic meal in a psistaria (restaurant serving grilled food), be sure to pick the skewers or chops up with your hands. No dainty silverware needed. Sides are often simple: potatoes, vegetables and dips.

Pretend you’re at Gramma’s house, with mayirefta
Home-style, one-pot, baked or casserole dishes, mayirefta are a staple of taverna life and therefore in the pantheon of typical Greek dishes. Stroll back into the restaurant to peruse what’s on offer. Prepared early, these dishes are left to cool to enhance the flavors and a good glance will whet your appetite as you choose.

Well-known mayirefta include moussaka (eggplant, minced meat, potatoes and cheese), yemista (vegetables stuffed with rice and herbs), lemonato (red meat or chicken with lemon and oregano) and stifadho (sweet, stewed meat with tomato and onion). But there are endless varieties, some vegetarian or vegan; others hearty meat, often served over rice, orzo, or pasta.

Where to try it: Mira, Parikia on Paros; Tereza, Myrsini on Tinos; tavernas all over Greece.

Where to try it: Tzitzikas & Mermingas, Athens; Halaris, Piso Livadi on Paros; To Maridaki on Hania, Crete; and Ston Pyrgo, Amorgos. 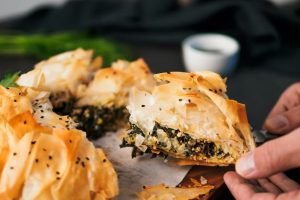 Crunch into crispy pies
Bakeries make endless variations of tyropita (cheese pie) and spanakopita (spinach pie), plus other pies, usually based on regional ingredients. In Crete, there is the luscious custard-filled bougatsa, as well as a seemingly endless variety of cheese pies with different herb and flavor accents, from honey to anise.

Where to try it: Bougatsa Iordanis, Hania on Crete; or Ariston, Athens.

Zap your palate with ouzo and other spirits
Ouzo – Greece’s famous liquor – has come to embody a way of eating and socializing, enjoyed with mezedhes during lazy, extended summer afternoons. Sipped slowly and ritually to cleanse the palate between dishes, ouzo is usually served in small bottles or karafakia (carafes) with a bowl of ice cubes to dilute it (turning it a cloudy white).

Ouzo is made from distilled grapes with residuals from fruit, grains and potatoes, and flavored with spices – primarily aniseed – giving it that licorice flavor. The best ouzo is produced on Lesvos.

Tsipouro is a distilled spirit, similar to grappa, that is made only in Greece. It’s created using the leftover must from pressing wine and is usually quaffed as an aperitif. Tsikoudia, also known as raki, is essentially the Cretan version of tsipouro.

If all of the above is too harsh a shot of alcohol for your tastes, you may well prefer the sweet liqueur mastiha, made with mastic resin grown on Chios. It’s an excellent digestive.

Where to try it: The World of Ouzo, Lesvos; and Mastiha Shop, Athens. 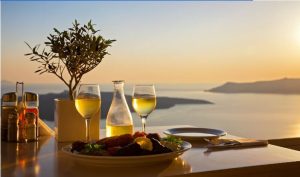 Sip on award-winning Greek wine
Greece’s wine industry benefits from some age-old indigenous varietals with unique character. The contemporary generation of winemakers is producing award-winning wines from the country’s premier wine regions, including Nemea in the Peloponnese, the vineyards of Santorini, the Iraklio Wine Country on Crete and Naoussa in the north.

White varieties include moschofilero, assyrtiko, athiri, roditis, robola, and savatiano. The most popular Greek reds include xinomavro, agiorgitiko and kotsifali. House or barrel wine varies dramatically in quality (white is the safer bet) and is ordered by the kilo/carafe or glass.

Retsina, white wine flavored with the resin of pine trees, became popular in the 1960s and retains a largely folkloric significance with foreigners. It’s something of an acquired taste but some winemakers make a modern version. It’s popular in Thessaloniki (where the main brand, Malamatina, is made) and it goes great with salty mezedhes and seafood.

Where to try it: Estate Argyros Winery and Gavalas Winery, both in Santorini; Thymiopoulos Vineyards, Naoussa.

Vegetarians and vegans
Vegetarians are well catered for in Greece since vegetables feature prominently – a legacy of lean times and the Orthodox faith’s fasting traditions. The more traditional a restaurant you go to, the more vegetable options you get, because they follow more of these fasting rules. If you come during Lent, it’s a vegan bonanza at these places.

Do ask, though, to be sure that the vegetables have not been prepared in a meat-based broth.

For those that eat dairy, Greece’s regions produce many different types of cheese, most using goat’s and sheep’s milk, with infinite variations in taste. Apart from feta, local cheeses include graviera (a nutty, mild Gruyere-like sheep’s-milk cheese), kasseri (similar to provolone), myzithra (ricotta-like whey cheese) and manouri (creamy soft cheese from the north). Not found elsewhere in Greece, Santorini’s chlorotyri is a soft, creamy goat’s cheese that gives a local twist to the traditional Greek salad or else turns up in dolmadhes in the island’s restaurants.

A year in food

Spring
Artichokes and other fresh vegetables abound while cheesemaking kicks into gear. Easter is celebrated with tsoureki (brioche-style bread, sometimes flavored with cherry kernels and mastic) and dyed-red hard-boiled eggs.

Summer
Watermelon, cherries and other fruit jam-pack markets. In August, Skala Kaloni on Lesvos celebrates its sardine festival, while in the Peloponnese you can attend Leonidio’s Aubergine Festival.

Autumn
Nuts and figs are harvested and raki (Cretan firewater) is distilled. Aegina’s pistachio industry celebrates Fistiki Fest in mid-September. Raki or tsikoudia festivals are held in Voukolies and Cretan villages in November when olive oil is produced.