The 7 best day trips from Dubrovnik

Dubrovnik’s spectacular old town ringed by its UNESCO-listed city walls are huge draws for over a million annual visitors. Come summer, the narrow lanes of the compact old town can get cramped with the tourist crush.

Take a day trip and move beyond the walls to explore fabulous spots of nature and cultural heritage less than two hours away. These tried and tested destinations are hands down the best day trips from Dubrovnik.

Lokrum
Why go: Get close to nature on a car-free island
Less than a mile across the water from Dubrovnik is tiny Lokrum, a protected nature reserve, and car-free island. Stroll among cacti, magnolias, palms, and eucalyptus trees in the botanical gardens, planted in the 19th century by its erstwhile owner, Archduke Maximilian I of Habsburg. A big draw is the permanent Game of Thrones exhibition housed in the 11th-century Benedictine monastery where fans line up to capture themselves sitting on a replica of the Iron Throne. Keen walkers will want to venture to the 19th-century hilltop Fort Royal and take in the dazzling views of Dubrovnik’s old town and Srđ hill from its rooftop.

Stay for a swim in the 10ft-deep salt lake known as the Dead Sea, or at one of the quiet rocky beaches lapped by impossibly turquoise waters. Forgot your bathing suit? You won’t need one at the nude beach at the island’s south-eastern end. Plenty of al fresco cafes and restaurants keep visitors well fed too. Lacroma Restaurant entices GOT buffs with their Stark Dynasty burger.

How to get to Lokrum from Dubrovnik:
A passenger ferry makes the 15-minute trip every half hour from Dubrovnik’s old town harbor to Portoč on Lokrum’s eastern coast.

Cavtat
Why go: For the artistic heritage
Pretty seaside Cavtat boasts a waterfront promenade and pebble beaches, but also has a rich artistic heritage. Celebrated artist Vlaho Bukovac was born here in 1855, before his artistic career took him to Paris, Zagreb, London and ultimately Prague. Today his childhood home is a three-story museum chronicling his artistic life. Wander through its many rooms to see the brightly painted walls he used as his first canvas, a collection of his personal possessions, period furniture, and his sun-filled atelier on the top floor.

Bukovac also left his artistic mark in the sea-facing 15th-century Church of Our Lady of the Snow with a 1909 work of The Madonna and Child. Meanwhile St. Nicholas church in the town center shelters four paintings of The Evangelists he completed in 1910. Perched on a hill in the cemetery is the domed Račić Family Mausoleum: another monument of artistic heritage created by the renowned sculptor Ivan Meštrović. Has all that art made you hungry? Buffet Atlas serves up breakfast and light lunches, with plenty of vegan and gluten-free options.

How to get to Cavtat from Dubrovnik:
Bus number 10 runs every hour from the city bus station, a 45-minute drive. Adriana Cavtat operates regular boat services from Dubrovnik’s old town harbor arriving in Cavtat 45 minutes later. 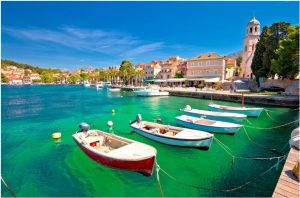 Konavle
Why go: For the wine and local cuisine
The Konavle valley covers a narrow slice of land wedged between two mountain ranges in the southernmost part of Croatia. This fertile region is blanketed with vineyards, dotted with olive groves, and is – unsurprisingly – a great destination for lovers of good food and wine.

Charming Ljuta is a popular stop with cyclists and hikers for its scenic river and waterfalls ribboned by wild forests, making up a protected landscape. It’s also a must-stop on the gastro trail. In a beautiful natural setting that was once an old mill, diners at Konavoski Dvori Eco Green Restaurant clink glasses next to the rushing rapids as waiters in traditional costumes serve up platters of local delicacies. Stop in at OPG Brajković to sample regional wines such as Dubrovacka Malvasija and Vranac, and olive oil pressed from local Oblica olives.

How to get to Konavle from Dubrovnik:
Bus number 25 goes to Ljuta from the main bus station three times a day, except on Sundays and holidays. It’s a 40-minute drive from Dubrovnik.

Sokol Grad
Why go: For the fortress and sweeping landscapes

Perched 82ft (25m) up the slope of a mountain looms Sokol fortress. Sokol has been inhabited since ancient times because of its strategic location on a mountain that today creates the border with neighboring Bosnia and Hercegovina and Montenegro. This exquisite medieval fortification opened to the public in 2013 after over 50 years of refurbishment work restored it to its 15th-century appearance.

It’s fun to ramble up and down this sprawling hillfort, peeking into chambers that sheltered its kitchen quarters, guardsmen houses, forge, and chapel. On display are weapons once used to defend the fortress, as well as hefty cannons and stone cannonballs. From the top of the ramparts enjoy sweeping views over the green valleys of Konavle punctuated by forests of pointy cypresses.

How to get to Sokol from Dubrovnik:
Sokol Grad is a 45-minute drive from Dubrovnik but isn’t serviced by public transport. Insider Holidays offers private tours that include a stop here. 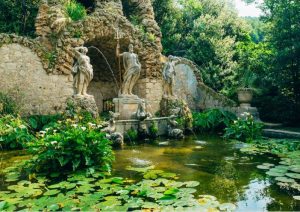 Trsteno
Why go: For the atmospheric gardens
Long before Game of Thrones, Trsteno was already on the map thanks to its enchanting gardens. First planted in the 15th century, Trsteno Arboretum spreads across 64 acres (25 hectares) with over 300 species of trees and plants. It’s a delight to wander along its overgrown paths through dense thickets of cypresses, hornbeams, Japanese palms, and bamboo groves to a soundtrack of birdsong. Look closely at the plaques identifying each tree and you’ll learn that many are well over a century old.

The Arboretum’s centerpiece is a Baroque sculpted fountain of Neptune spouting arching jets of water into a pool of waterlilies, goldfish, and frogs. You’ll find the stone aqueduct behind the fountain that once fed it. The 15th-century villa the gardens were designed for still stands, as does a small chapel. At the covered cliffside pavilion, pause to admire the nearby Elafiti Islands and Trsteno’s small port and beach below.

How to get to Trsteno from Dubrovnik:
Public bus number 35 has regular daily runs to Trsteno, while buses 12, 15, and 21 operate infrequently, but not on Sundays or holidays. The ride from Dubrovnik’s bus station takes 30 minutes. 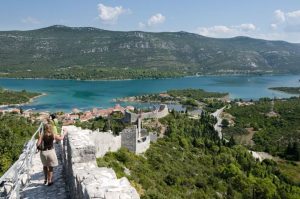 Ston
Why go: Climb the longest walls in Europe and visit the salt pans
Tiny Ston sits close to the edge of the Pelješac Peninsula, connecting it to the mainland. The 15th-century Ston Walls extend 3.4 miles (5.5 km) and are part of one of the longest and largest fortifications in the world. Climb the walls all the way to Ston’s sister town Mali Ston, making a halt at St Michael’s Mount on the hilltop to take in the rolling hills and grid of salt pans below. Note that the uphill jaunt from Ston is demanding and you may want to attempt the circuit in reverse!

Ston is also renowned for its historic salt pans dating from Roman times when salt had the same value as gold and was used as a currency. Salt is still produced at the open air saltworks at Solana Ston, which welcomes visitors. Walked up an appetite? Tuck into locally farmed oysters and mussels washed down with Pelješac wines such as a Plavac Mali red or Pošip white at Bota Šare Restaurant & Oyster Bar in Mali Ston.

How to get to Ston from Dubrovnik:
Bus number 15 services Ston (three times a day, except Sundays/holidays), as well as 21 (once a day except for weekends/holidays). The drive from Dubrovnik bus station takes one hour.

Korčula
Why go: Explore enchanting Korčula Town
Bewitchingly beautiful Korčula Town, a 13th-century walled citadel on the north-east coast of Korčula Island, is a delight to explore. Climb the stone staircase to Kopnena Vrata (the Land Gate), opening onto a clever fishbone layout of narrow streets designed to protect residents from the chilly gusts of the bora wind. Pop into the 15th-century St Mark’s Cathedral to behold two works by Tintoretto: Three Saints above the altar, and The Annunciation beside the altar of St Anthony. Next head up the bell tower for vistas over pretty terracotta rooftops, faded facades, and secret courtyards, to the Pelješac peninsula across the channel.

Korčula claims Marco Polo as its own. Decide for yourself after visiting the Marco Polo House located in a handsome 17th-century stone building on the site of his purported birthplace. Petra Kanavelića promenade on the eastern seafront is lined with a string of restaurants and cafes shaded by towering Aleppo pines. Snag a romantic table with a seaview at Filippi, recommended by Michelin for its contemporary Mediterranean cuisine.

How to get to Korčula from Dubrovnik:
A trip by ferry from Dubrovnik’s Gruž port to Korčula Town takes two hours. Daily services run during the tourist season (June to September) operated by Jadrolinija, Krilo, and TP Line (except Sundays).