They have been present before in the capital but now you can see them on every street corner. Large, small, gigantic on the facades of palaces, camouflage on trash cans, covers for small electric cabins, hidden corner fillers or embellishments on the facades of the old communist-era palaces.

The “era” of Edi Rama “
The game with colors in Tirana was opened by nobody but the current Prime Minister of Albania, who in the 2000s was the most rumored about mayor matters in the world, for many bold and counter-current actions, one of which was the “painting” ”of old palaces, without any pictorial genre but full of colors. The effect was tremendous, the criticism also numerous. The murals like the one of the roundabout, at the entrance of Tirana “These are the things we are fighting for”, appeared in the world media, together with the triangles of the palaces along the ring, or even the sweet colors a little more “inside the frames” of the “Russian Palaces” in the city center. Many of them went under bleach and no longer have the former splendor but some toponyms that flowed from that campaign as “the palace with arrows”, are still used today. 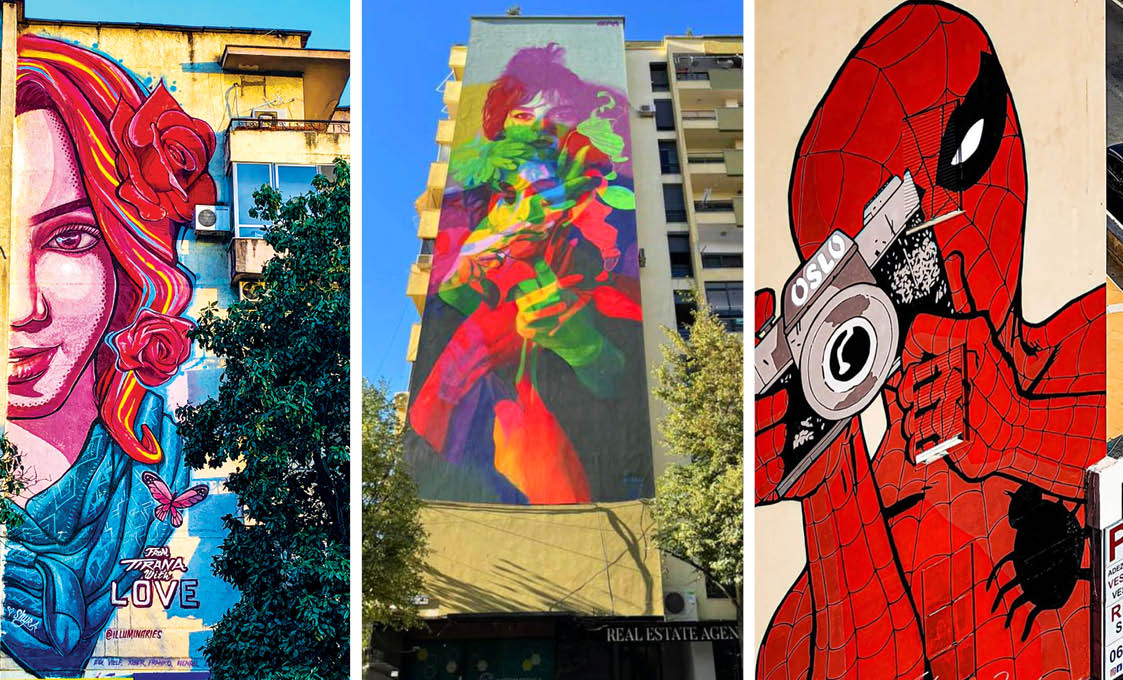 FRANKO – a new era of murals
After the “era of Edi Rama”, which lasted almost a decade, in the capital used to display here and there small murals with a signature in capital letters “FRANKO”. A young kid from Vlora had just started throwing his signature through the first murals of Tirana. Somewhere with the softness and playful motifs of the former childhood and somewhere with strong social messages, the walls of Tirana began to be filled with new and colorful images, which made the capital warmer. 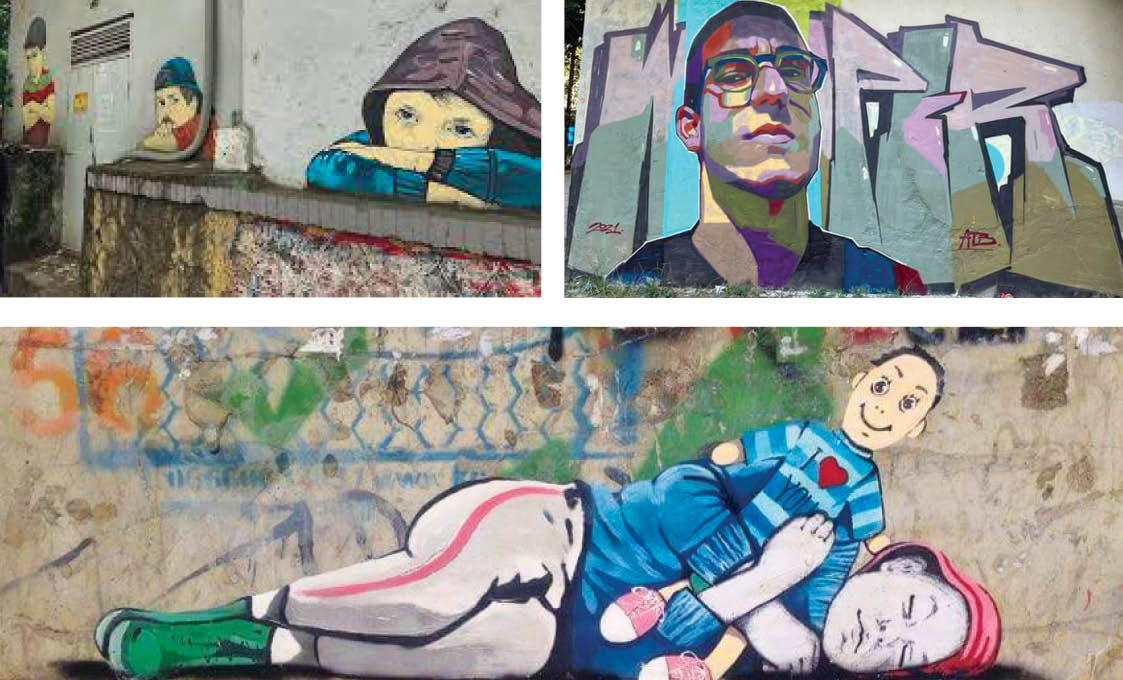 They occupied almost every corner, extending the effect also all over the social networks, such as the mural of the two brothers, wearing jackets with the flags of Albania and Kosovo, where the elder brother – Albania, was holding his younger brother – Kosovo. Equally famous became the figure of a lonely little boy, looking sadly at passers-by and cars, somewhere at the heavily beaten intersection of “Sami Frashëri” street.

Later, Franco thought of ending the boy’s loneliness and “added” two friends to him. And after the sudden arrival of the pandemic in our lives, children were “equipped” with masks, to give the message of respect for the new rules. Surely when the effects of the virus will go away, even children will “remove” the mask.

There are dozens of works that bear his signature in Tirana, while even during the isolation, he didn`t stop working for the realization of mural paintings, dedicating to the pandemic and diseases the mural painting “Poisoned land”, which was ranked among 15 best murals in the world on the occasion of World Environment Day.
Seeing the increase of colors in the capital, the municipality of Tirana “recruited” this boy and very soon the murals began to appear in places that were not walls, such as small electrical cabins or telephone cables, which were covered with pictures of the most famous cartoon characters or barriers to cover trash cans, where flowers or messages were painted for the benefit of the environment.

Mural Fest
The third era of murals in the capital belongs to Mural Fest, which is now one of the most beautiful festivals taking place in Albania, giving not only to the capital life and color. Dozens of foreign mural artists from all over the world, USA, Argentina, Uruguay, Spain, France, Poland, Italy, Serbia, etc., have entered the competition for the most beautiful mural, filling old facades with works of art, brick walls, corners of palaces on the main street, where today the most magical colors and portraits are displayed.

The image of a girl holding a bouquet of flowers in her hand in one of the palaces of Tirana was qualified in the 25 finalists to be declared the best work in the world for 2021.
The work of the painter Gera, in the framework of “Mural Fest 2021” that was organized in Tirana, managed to be ranked among the best works in the world for street art or as it is otherwise known Street Art.

The festival also had its opponents, when on the big wall of a palace somewhere in the new Tirana, appeared the figure of two sad and naked old men, holding hands, the woman with a rope around her neck, while was holding it clasped in her hand and the old man, taking her hand too. The reaction of the community was that strong that after a few days the painting was deleted. They claimed that the work of the Italian author Nemo, was depressing and they did not have to wake up in the morning seeing that sad old couple every day.
Street Art Cities is today a global platform with a mission to promote and document urban art worldwide. 900 cities with over 35 thousand works of art. The 25 best works of art, including the “Serena” of the Albanian artist who participated in “Mural Fest 2021” were subjected to an online rating and the winner came out from there.
Curators, including the famous painter Helidon Haliti, have seen the decoration of Tirana as the development of a beautiful woman who begins her journey with dreams since early youth. “Tirana remains a goddess to be admired, with eyes towards the West, and our future is related to western development”, says Haliti.
These are some of the details regarding the Mural Fest. This project is an initiative of decor section from the Municipality of Tirana.

It may take us years and decades to officially become part of the European Union but one thing is for sure; the murals have made Tirana a more European city, although its spaces suffer greatly from a lack of greenery and social environments.