Kosovo of the seven VIA FERRATAS!

Home » Wonders » Kosovo of the seven VIA FERRATAS!

Kosovo is the number one destination of “Via Ferrata” in our region. There are seven such where mountaineering and outdoor activities fans can climb and experience the adrenaline.

Each of the seven Via Ferratas of Kosovo is unique. They differ in the degree of difficulty, the nature where they are built, the landscapes that unfold when climbing up and the various opportunities they offer to experience other tourist products, such as: Tibetan Bridge and Zipline in Peja, visits to cultural and historical heritage in Prizren, or archeological remains of the Byzantine period and the walls of ancient castles.

Via Ferrata is a trail which is built on rocky parts but which can be used by any visitor who seeks activities that create adrenaline and adventure. It is mainly built by placing a metal wire that runs along the entire rock path as well as placing iron stairs which enable you to reach the height without any problems, and using the necessary safety equipment during your climbing you will experience a unforgettable pleasure in your life experience.

Meet Via Ferratas of Kosovo 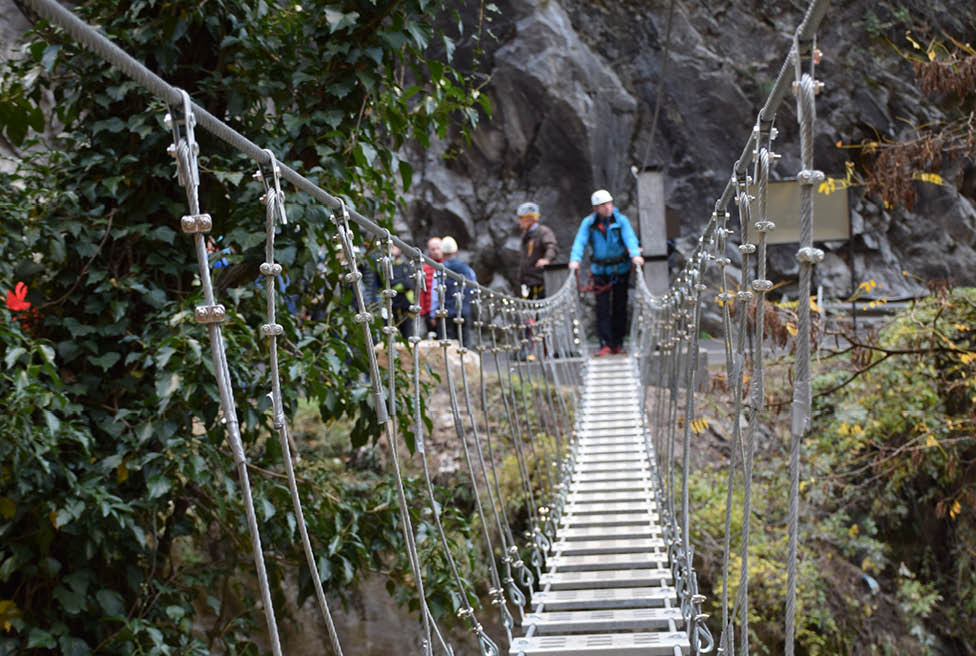 PEJA – Via Ferrata “Ari”
The first Via Ferrata built in Kosovo is called “Via Ferrata Ari”, which was operational in the period of 2013-2014. It is located on the third kilometer of the Rugova Gorge. It is 450 meters long and extends vertically. It takes about 2.5 – 3 hours to complete the climbing path, which passes through three caves.

Via Ferrata Mat
As it has a horizontal extension, it is considered to be easier to cross. This trail is more preferable for groups trying to try a via ferrata for the first time, as it does not require prior experience.

Via Ferrata “Marimangat”
It is also known as the longest Via Ferrata and with the highest level of difficulty in Kosovo. It has a length of 1 km. What distinguishes it from the others is the connection with the Tibetan Bridge, which is the highest in the region, with a height of 60 meters. 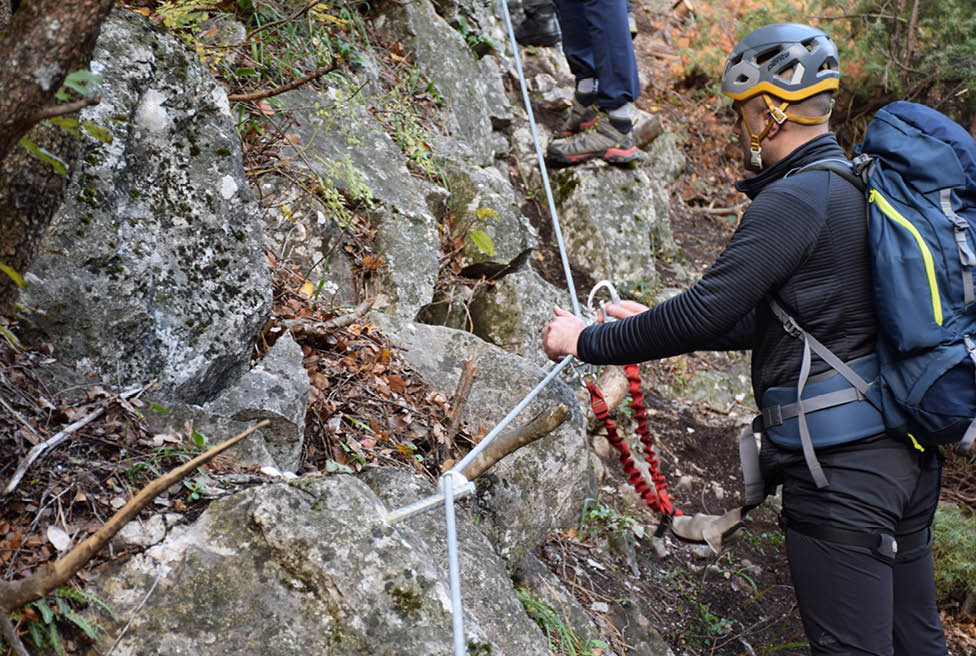 Via Ferrata “Caves”
Another special Via Ferrata. With a length of 600 meters, the trail passes through 8 different caves. This trail rewards visitors with the stunning panorama of Rugova Gorge.

Prizren – Via Ferrata Panorama
It is located 4.5 km from the city center, in the valley of the Lumbardhi river. It is 510 meters long and rises to a height of 185 meters. The starting point of the climb is the Tibetan Bridge. It takes approximately 1.5 hours to climb and 30 minutes to return. 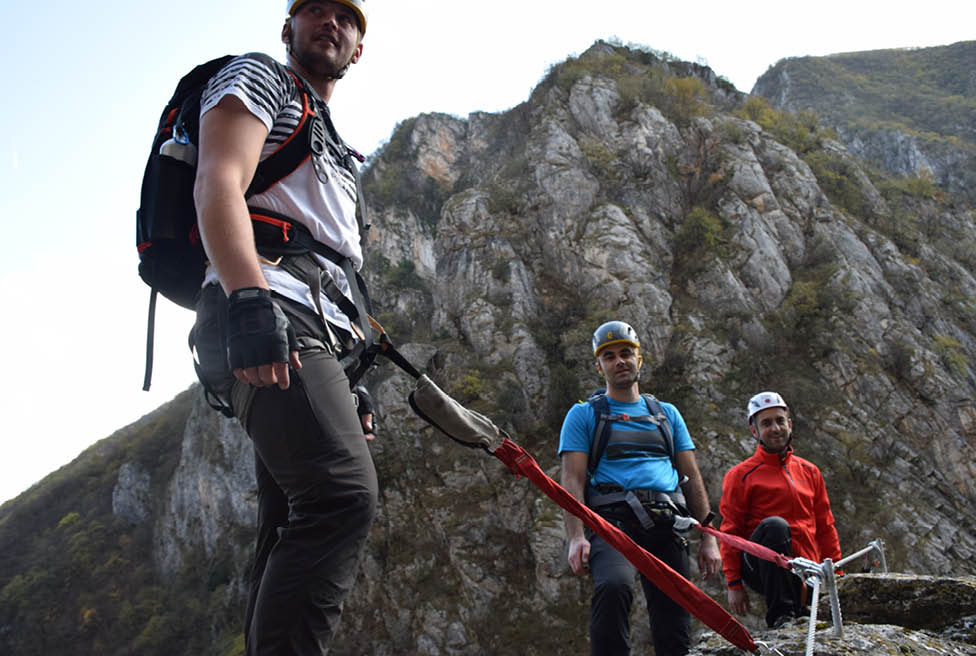 Deçan
The Via Ferrata of Deçan is located 4 km on the south side of the Deçan Gorge, in Accursed Mountains. The climbing path is 470 m and there are about 3 km of trails for non-difficult walks, which can be crossed even during winter. Anyone who climbs to the top will have a 360 ° view of the mountains of Gjeravica and Mariash, the Dukagjini Plain and the northern part of the Sharr Mountains.

Zubin Potok Via Ferrata Berim
It is one of the longest trails in the region. It is located in the northwestern part of Kosovo, on the rocks of Berim on Mokra Gora Mountain. It is 3 km long and takes about 6 hours to climb. It has four suspension bridges and passes through a vertical cave where there is a seat hanging in the air from where for visitors unfolds the wonderful view of the valley and the lake. It is located about 25 km from Zubin Potok. 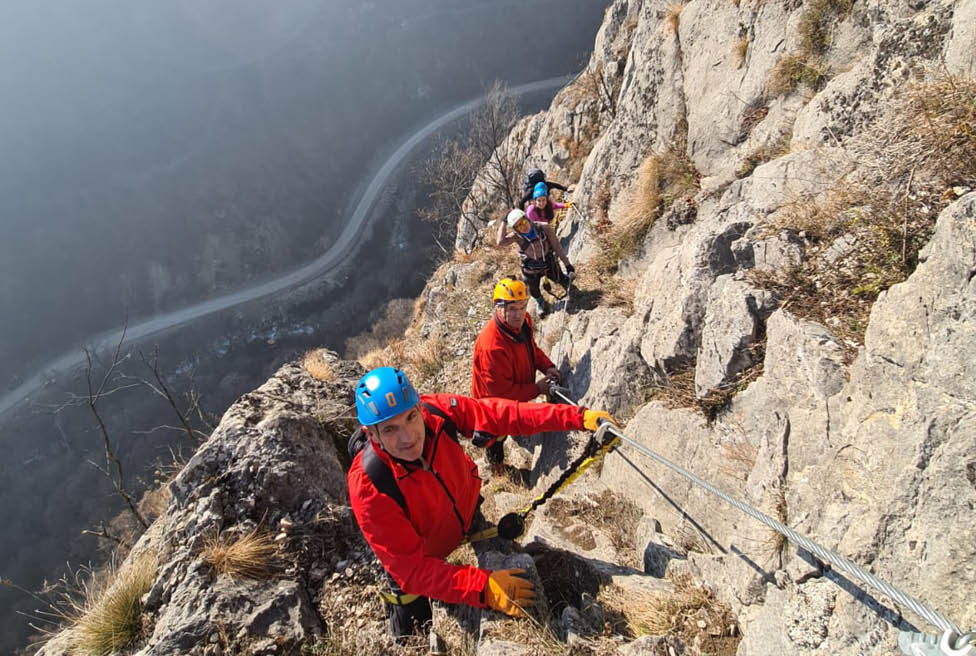 Nol Krasniqi, a mountain guide, has been exploring the nature of Kosovo for over ten years. He is one of the most renowned mountaineering and hiking professionals, with expertise in the construction and operation of Via Ferratas.

“If we make a comparison from 2013 when we opened the first Via Ferrata, then we see that the number of tourists (before the pandemic) has been increasing every year, so the construction of these attractions has greatly affected the number of tourists. “Says Noli, for whom Kosovo is the leader of Via Ferratas in the Balkans. “In every corner of Kosovo you find a Via Ferrata,” he says. Kosovo even has many other countries with potential for the construction of other Via Ferratas, but these ideas must always be accompanied by other ideas and innovations. 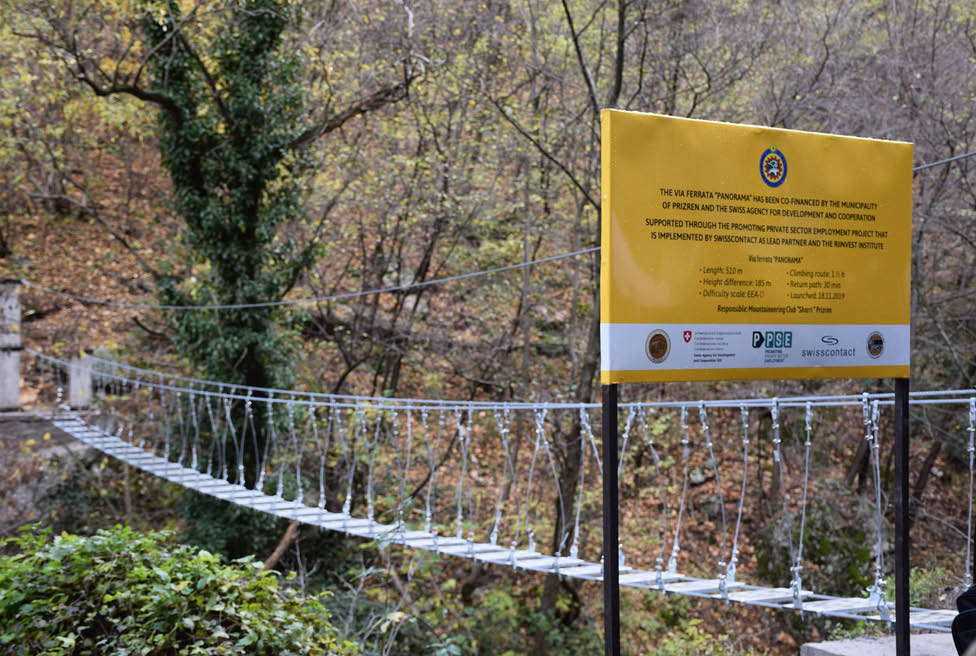 Adriatik Gacaferi is the founder of the Kosovo Mountain Club, an organization that has as its main objective the promotion of mountaineering activities in Kosovo, encouraging residents to engage in mountaineering, but also promoting nature and preserving the environment.

Immediately after its establishment, the Kosovo Mountaineers Club started to work on the construction of Via Ferrata in Deçan. “Via Ferrata in Deçan has added a great value to this side. Deçan has many strong points as a tourist destination, such as: Bjeshkët e Namuna (Accursed Mountains), National Park where 25% of it in Kosovo lies in the territory of Deçan but also various objects of cultural and spiritual heritage” Adriatik says. 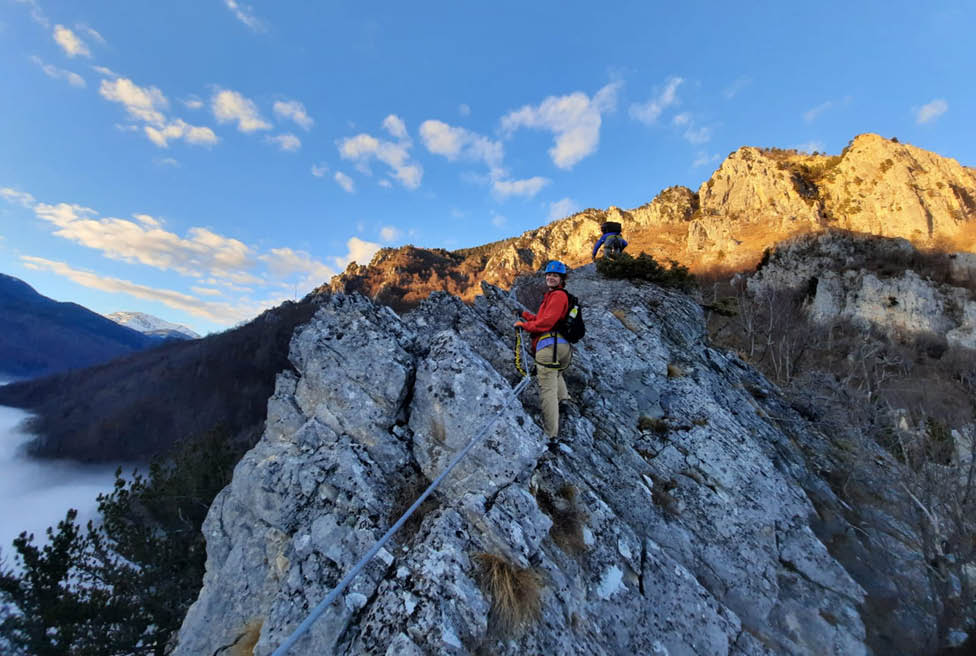 Adriatik says that Via Ferrata has added great value to this side. “Anyone visiting Deçan can now stay one more day and experience the adventure offered by Via Ferrata,” he added.

Via Ferrata “Panorama” in Prizren enables nature enthusiasts to test their limits in the mountains of the southern part of Kosovo. Deni Hameli is the initiator of the development of this tourist product. The idea of naming it “Panorama” was born while they were working on the rocky site, in a scenic position towards the Sharr Mountains and the Lumbardh gorge provides a very panoramic view, every season in that part is fabulous.

“Prizren is a city where nature is intertwined with history. Services are offered as a visit to cultural heritage sites, continuing with the climb to Via Ferrata. After climbing Via Ferrata we also offer mountain walking tours in some areas that are connected to the Via Ferrata trail. “Mountain tourism packages are now enlarged, we have studied and processed them for years,” says Deni.

Via Ferrata in Prizren as the first in the Sharr area, includes 3 countries in this zone: Kosovo, Northern Macedonia and Albania. It lies in a picturesque area where the flora and fauna is rich. The presence of many cultural heritage sites, the ethnic cultural diversity, the rich gastronomy, the closeness to the national park “Sharri” and many hotel facilities make this tourist attraction special.

Swiss support for the development of tourism in Kosovo

Since 2014, Swisscontact supports development of tourism in Kosovo. Examples of such support are the development of new products or destinations, like the Via Ferratas around Kosovo or the mountain guesthouses. Through the project Promoting Private Sector Employment (PPSE) funded by the Swiss Agency for Development and Cooperation (SDC), many activities were carried out in the area of tourism development. These activities have contributed in increasing employment and income for the local community. Such activities focused in coordinating and managing the destionation, its promotion, the improvement of the tourism offer and tourism services.