When traveling south from Llogara Pass, the first twenty kilometers or so of the Riviera are experienced winding through a kind of vague terrain—a mixture of old and new buildings settled back within the trees and crowding up against the road. It is not until a sharp bend in the road, where the view suddenly opens up across a deep gorge, that Dhërmi is revealed, and one finally understands a primary sensibility of the Riviera: the iconic hillside village. Dhërmi is one of the gems of south Albania: incredibly rich in history, and due to its relative stability over time, more developed and a bit larger than other villages. Its geography is dramatic. From the national road the village seems impossibly stacked against the steep rock. The bell towers of centuries-old churches rise up in profile against the white fabric behind them, all of it interrupted in places by lush swaths of green overgrowth, anywhere it gets a chance. A stroll through the village though reveals a much more gentle landscape above—even wide swaths of flat space in a couple of lovely plazas.
The village is organized as a kind of
process to reach the church at the top. It is a lovely route that brings the walker across the various types of houses and smaller civic and religious buildings, and culminates in one of the more dramatic views of the entire Albanian coastline, set from within the yard of the church.
At the top of the village, perched boldly on a rocky outcropping sits the Monastery of Pangji (Manastiri i Pangjisë). The church grounds date all the way to the thirteen to fourteenth century. There are three other monasteries—the most famous of them being St. Theodore, in addition to the Monastery of St. Mary and the Monastery of Stavridh. 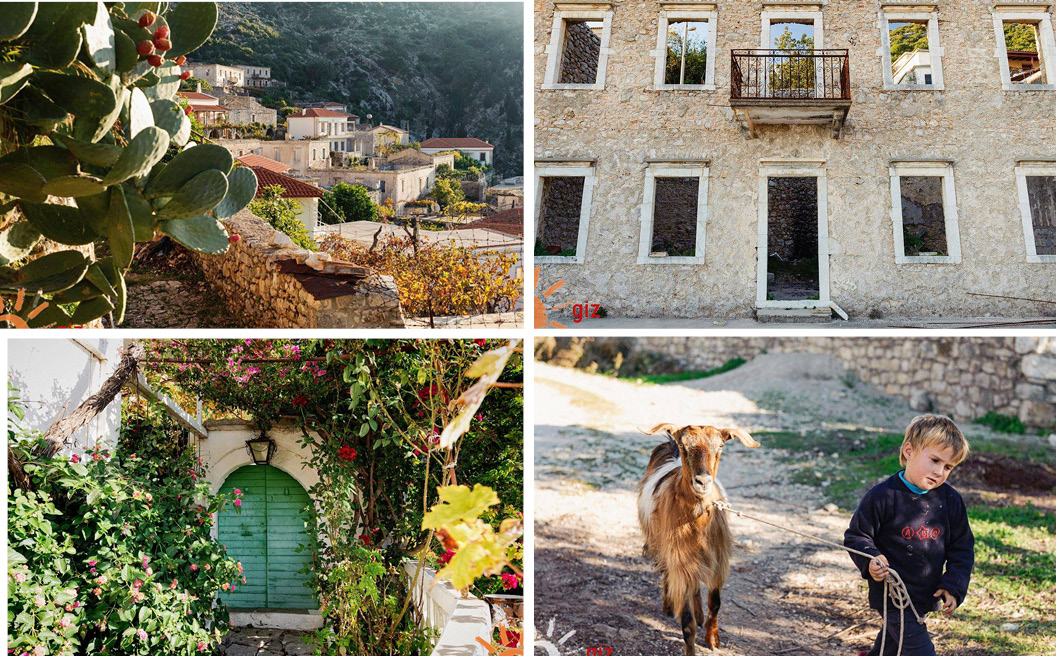 Vuno can feel at times like classic Greek or Italian villages in their steepness and cutback roads. In it, too, are many fine examples of the regional architecture from the eighteenth century, both in houses and churches. Vuno has been home to many notable scholars as well. Like Kudhës and Qeparo, Vuno is quite stunning in juxtaposition to classic south Albanian ruggedness, and a certain kind of cosmopolitanism: shepherds and professors have coexisted in centuries-old stone houses perched above the sea.
Vuno, like Dhermi, is an extremely steep village. It is built across the side of a gently concave hill, and the majority of the historic fabric sits above the national road. The built environment is compact and produces particularly interesting typologies of open and close spaces, routes and connections; including the arched passages typical of Vuno.
There are a number of characteristic dwellings in the village of Vuno, which, through their architecture and traditional ways of working, preserve the cultural heritage of the area. Some of the most notable among them are the House with the Tower of Shane Koka and the Dwelling of Odise Kasneci.
Residents of Vuno, or Vunjotsit, are mainly indigenous, but through the centuries many of them have been forced to emigrate and work. A large number of men from Vuno worked in southern France in the
Saint-Étienne mines, as well as in Italy.
The 200 year old school in Vuno was built
very close to the main Church of the Village, to offer room for education to the young people.
The school of Vuno closed down some years ago, due to the very limited number of students. Currently, it is being used as a hostel during summer season.
The Cyprus tree of the Church (Qiparisi i Kambonares se Kishes se Vunoit) is a natural monument. 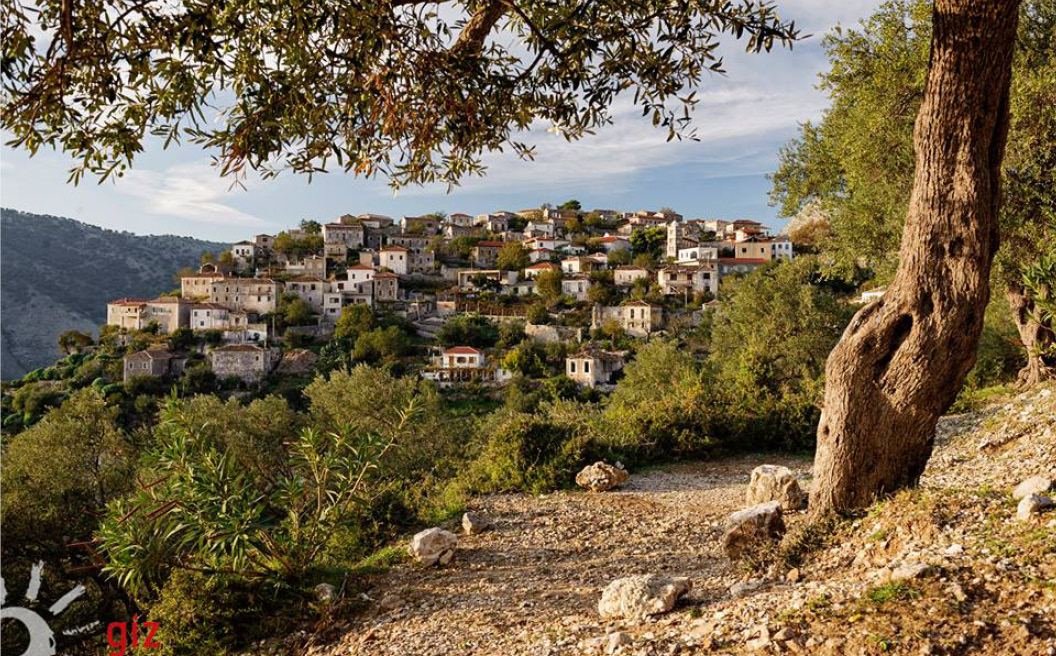 Qeparo is a beautiful Albanian village, which has maintained its form through centuries of political turmoil, and bears a weathered, wizened, and calm feeling, as if nothing could phase it. To walk through Qeparo is to encounter ways of life that have been lost for a century. The village rises on a rocky ridge about 300 meters above sea level, having a castle like urban setting. In comparison with other villages of the coast, it has the best preserved traditional architecture and urban fabric.
The old village impresses with the stunning beauty, the harmony with the terrain and the stone houses with their typical traditional architecture, as in other coastal villages. It is very well preserved, in spite of the fact that a number of historic houses are being abandoned. The built environment is compact and produces particularly interesting typologies of open and close spaces, routes and connections. The way how houses come together, looking from above one another, and the inner garden space it`s impressive. 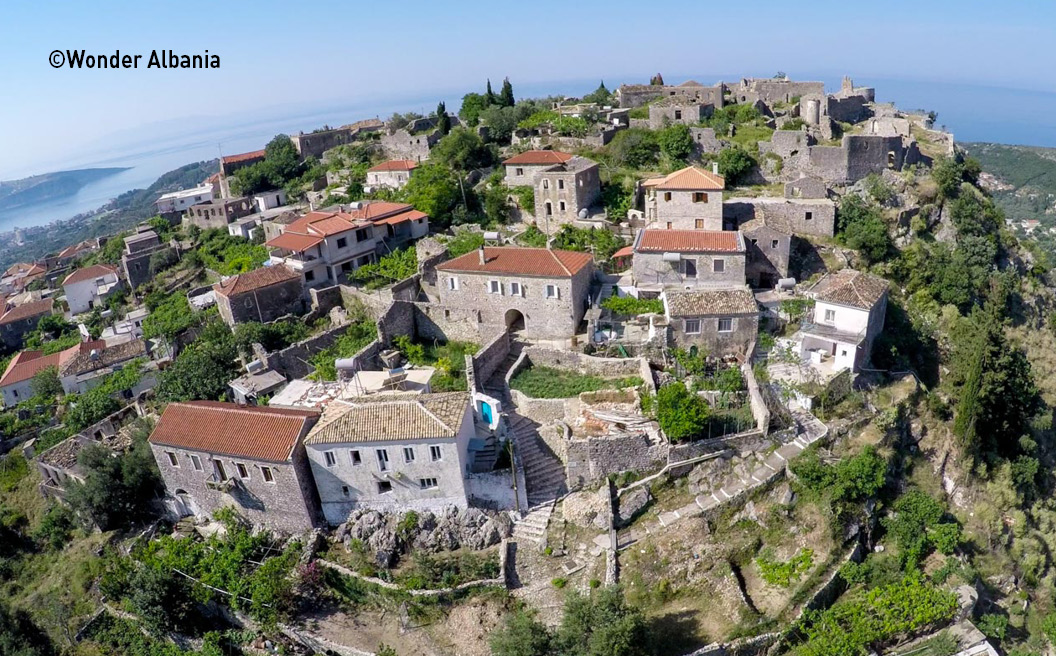 The Himara Village is stretched long and low across a rock outcropping, which has a kind of pride in its posture as it looms over the sea. The orientation through the village is easy; one can wander the streets freely and easily being rewarded for curiosity with magical discoveries along the way.